Kittens are born without teeth but within the first two to three weeks the deciduous (“baby”) teeth erupt. All of the deciduous teeth are present by 6 to 7 weeks of age. An 8-week-old kitten will have 26 teeth. These will start to fall out around 3 months of age as the permanent teeth erupt. All of the adult teeth should be through by 6 to 7 months of age. In all, the adult cat has 30 teeth. 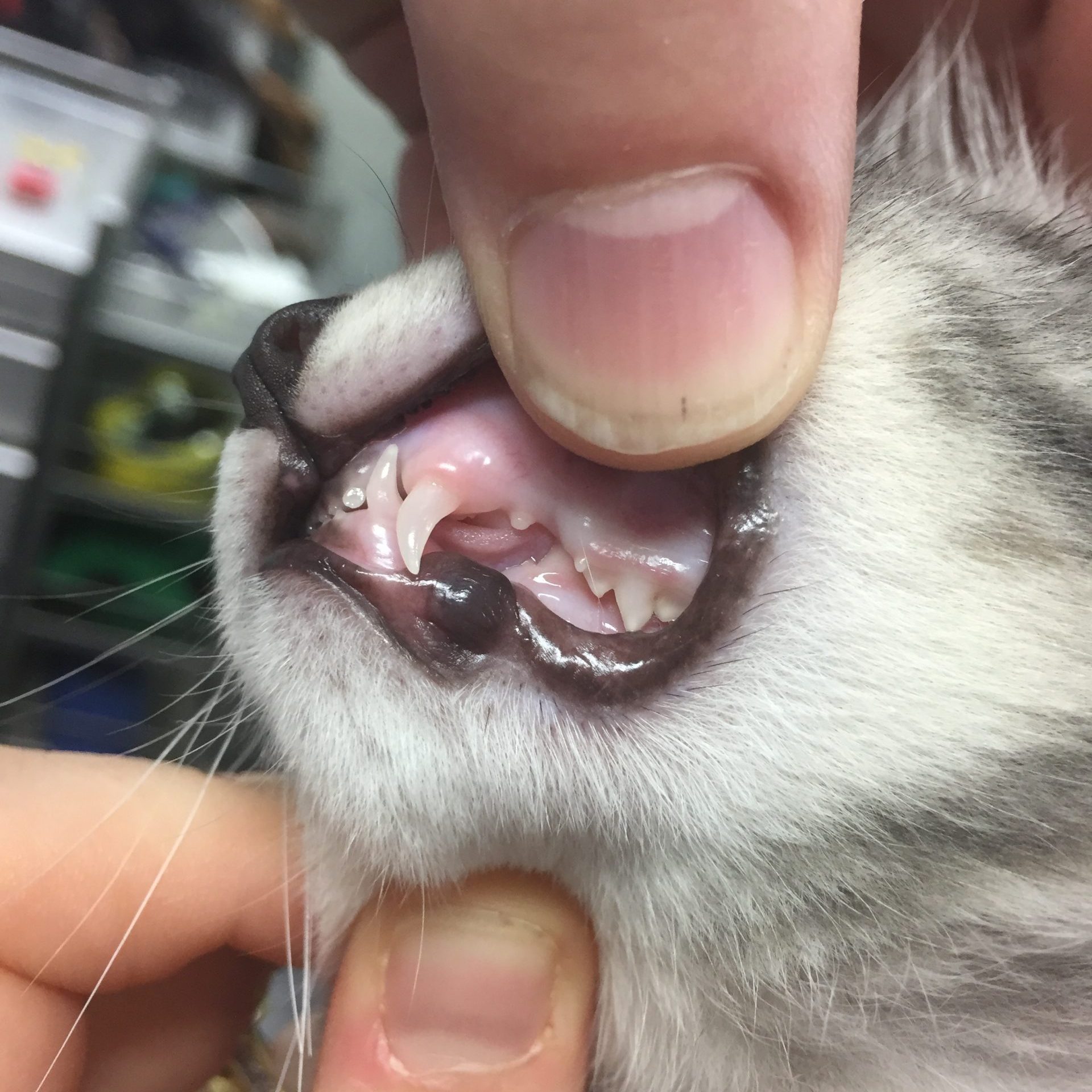 The cat has evolved as an obligate carnivore. That means that it eats other living animals. All of the teeth are sharp (compared to dogs where some of the molars have flat grinding surfaces) and are designed to cut the prey into pieces that can then be swallowed. This means that cats aren’t designed to chew their food. They only need to cut it into small enough pieces to swallow.

For the above reason, cats that don’t hunt prey will not need to use their teeth as designed and will develop dental problems as a result. It must be noted though, that a recent survey of feral cats in the Northern Territory showed that these cats had all of the dental conditions of domestic pets except calculus (“tartar”) on the teeth.

Malocclusions (bad bites) are also uncommon in kittens. When they do occur it is usually in the brachycephalic breeds (shorter nose breeds e.g. Persian). Unfortunately, when they occur, the sharp canine teeth cause severe trauma especially to the lips.

Many other conditions can occur but usually do so less frequently. It is important to ensure that you get the teeth checked whenever the cat is at the vets. Kitten vaccination and desexing times are an ideal age for this to be done.

How do I look after my Kitten’s Teeth?

As I have said earlier, the majority of kittens don’t have any problems with eruption of their teeth or with the development of the permanent teeth. To ensure that these teeth remain healthy throughout the cat’s life there are certain procedures and precautions that can be followed.

Kittens love to chew and this should be encouraged but with commonsense. Remember that these teeth are more fragile than the permanent ones. Games, toys and chewing behaviours need to encourage the development of healthy gums and teeth and not cause any damage in the process. Brushing of the teeth (using pet toothpaste) should be started at an early age so that the kitten learns that it is a pleasant process. Whatever you put in your cat’s mouth will be swallowed so don’t use human toothpaste (very high fluoride and designed to be spat out) or things such as bicarb, salt or peroxide. These can all harm your cat if swallowed. The teeth should be brushed once daily and in a simple back and forward motion.

Chewing for dental health is difficult to encourage in the cat. We don’t want them out hunting our wildlife yet we know that we need them to chew through the carcasses to clean their teeth. The closest we can come to this is in feeding raw chicken wings. Don’t feed cooked ones and don’t feed the drumsticks (we eat young chicken in this country and the “knuckle” will come off the drumstick and can become stuck in the mouth or throat). I like to feed them at least twice per week.

If the cat won’t eat them initially, you can sear the skin (put the wing in a HOT pan for a few seconds so that only the skin will be cooked – this brings out the flavour). Don’t give cats chicken wings straight out of the fridge. The chicken fed should be good quality (suitable for human consumption) as their can be a risk of salmonellosis with raw chicken (especially if “pet quality” food).